Now that we are finally back to life (back to reality), the process of de-summering the house has begun in earnest. Beach towels that hung on the hooks in the front hall have been folded and put in the closet, making way for fall coats. Stale snacks that never got consumed (because of the ice cream, duh) have been pitched, with fresh school-year snacks taking their place. Toys that had been left on the counter since June were finally shelved, replaced by a new caddy (on sale at Target, score!) filled with school supplies (that must remain in said caddy under penalty of death because, for the love of God, how do the scissors disappear so quickly up in here and did you really need to use the entire roll of tape for your “special project”?).

The art closet remains on my to-do list; stay tuned.

While happily helping the orphaned items find their homes, I was reminded of another (perhaps the only other?) time this summer when I reorganized a portion of the kitchen. Except it wasn’t really reorganizing; it was more excavating. Back when Nick and I went away to Puerto Rico in July, my sister-in-law, Emi, came to watch the girls… which meant I had to do a serious house-clean. Okay, I didn’t have to – but I really wanted to.

You see, Emi is one of those uber-organized, super-clean people (yes, we get along extremely well; stop laughing). Whereas my motto is It’s Time To Vacuum When The Dog Hair Starts Rolling Across The Dining Room Like Tumbleweeds, Emi’s motto is Why Vacuum Three Times A Day When You Can Vacuum Four? Nearly every time she comes here, she re-sorts and reorganizes the Tupperware and makes sure our counters are always nice and shiny.

Although this is, indeed, lovely – and, one might think, motivation for me to not tidy up before she arrives, since she’ll do it better than I would, anyway – I nevertheless want to at least try to have things in some semblance of order before she visits, not because Emi judges me (she doesn’t at all), but because I like to prove to myself that I’m capable of holding to a higher standard. For a couple of days, anyway. This time, I went for shock value and actually went through the Tupperware on my own (ah ha!) and made sure the food in our cupboards was safely accessible (by which I mean re-stacking the canned goods so they didn’t conk you on the head when you opened the cupboard to get yourself some cereal).

As I attempted to sort through the baking supplies, I discovered that some of them didn’t move, and was mortified when I remembered the reason why: they were still stuck in the Karo syrup that had spilled. When we were making Christmas cookies. Last December. I mean, it wasn’t a surprise; I’d known that the syrup was there all these months. In fact, I’d deliberately left it there when it spilled, sloshing its thick sweetness all over the drawer, because how in the heck does one even begin to clean up that much Karo syrup? (For the uninitiated, Karo is a brand of corn syrup that is occasionally used in baking. It is dense, like molasses, but clear – and sticky, like… syrup – and makes an excellent ingredient in cookie frosting because it causes the icing to harden to a glossy finish. For this same reason, it is a complete nightmare when it, say, spills and covers a drawer.)

By the time I realized what had happened (back in December), the other baking supplies were nestled in a bed of syrup at least a quarter inch thick. It made my head spin just thinking about removing everything – dragging strands of syrup through the air like tacky mozzarella – and then getting the Karo off of each box, bottle, and bag. And then there would be the mess of syrup in the drawer that would need scrubbing… I simply couldn’t even.

So I did what any other (procrastinating) person would have done: I just left it there. Another day, I’d tackle it. Another time, when I had the energy. But then the syrup, um, hardened, creating its own little veneer, and suddenly cleaning it up became far less urgent. The baking supplies were still stuck, of course, but they were relatively easily pried out – and when I did, I was met with a thin layer of sugary plastic rather than sticky terror, so I just kind of forgot about it.

Until I knew that we’d be gone and Emi would be here and she’d see the fossilized remains in our drawer and would be all, How the heck did this happen? and I’d have to explain that it had been there since December and I’d been too  busy to clean it up, and, well, that was just too much, even for me. It had to be taken care of. 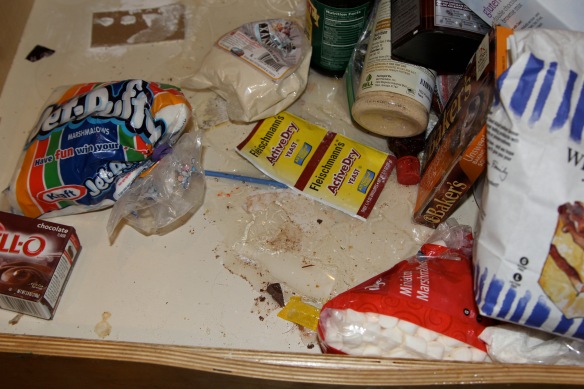 Yup. Just a little bit of a mess down in there.

After removing everything that broke free without a fight, I was left with what essentially amounted to an archeological dig. Remember in Jurassic Park when the mosquito is trapped in the amber? That was basically my kitchen, except with Anise Extract and a rubber band instead of a fossilized bug. 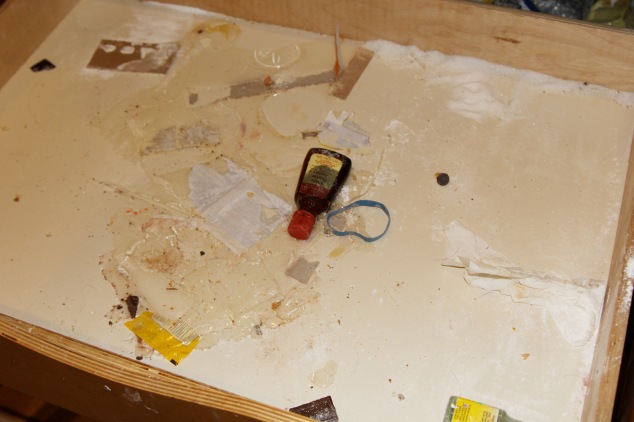 You can’t really see it here, but the things that I’d pulled from the resin-y bottom left impressions behind, so it was totally like an archeological expedition. This was right above the mesozoic layer.

I tried to remove the remaining veneer by hand but soon discovered that doing so was impossible because it was, you know, stuck to the drawer. As it had hardened, it left no room between itself and the laminate, so I couldn’t reach beneath and pry it loose. I considered removing the drawer and filling it with water to, I don’t know, melt it down but that seemed to be pure folly.

“You know,” I informed Nick, “I’ve decided that it really isn’t a problem. I mean, it’s been here for seven months. Do we really have to clean it up?”

He just gave me a look.

“Okay, fine. Be all sanitary. Whatever.”

It became clear that the only option would be to chip away at it – literally – using some sort of chisel. We don’t happen to have chisels lying around, but we do happen to have my grandfather’s old toolbox filled with all sorts of random utensils, including this delightful file-like thing.

We like to get all Home Improvement up in here.

What, like you don’t ask your husband to snap photos of you chiseling away fossilized corn syrup in case you ever decide to blog about it. Psh.

It was tedious – and surprisingly tiring – work but eventually the veneer came up, one little plastic bit at a time. Twenty minutes later, the drawer was filled with shards of see-through rock candy, which was fairly easy to dump into the trash. A few paper towels and some GreenWorks squirts later, and voila – good as new! 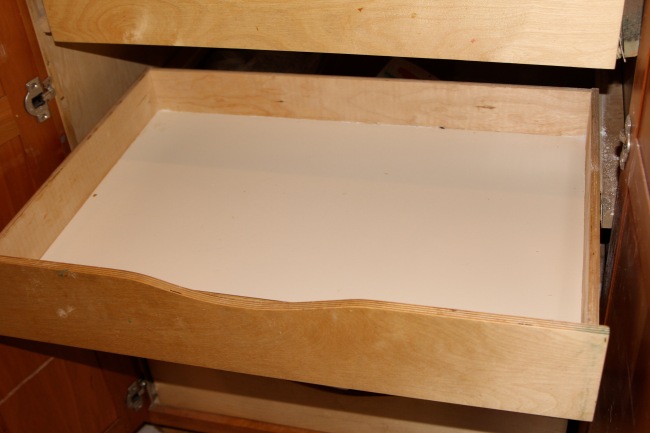 Please ignore whatever schmutz is on the front of the drawer. It’s always what’s on the inside that counts anyway, right?

After re-filing the contents, I stood back and admired my handiwork. Quite amazing, really. THIS DRAWER IS SO WONDERFULLY ORGANIZED. Surely you would feel welcome in our tidy, cozy home, Emi. Would you like to put leftovers in some Tupperware? BOOM. Right there. How d’you like me now?

I’m pretty sure it was the methodically catalogued baking cabinet that allowed Emi to not totally lose her mind when all three dogs got into the trash and wound up recycling its contents – out both ends – on her bedroom floor. I hope we left the carpet cleaner out, because if not, she’d have to have waded through the cupboards containing the cleaning supplies, and let’s just say they’re not exactly as easy to sort through as the Tupperware, if you know what I mean. One can only order so many areas of the house, no? Plus, I appreciate the irony of untidy cleaning supplies. Or at least that’s what I’m telling myself.

So, in closing, if you were concerned that the stash of Easter candy you just found – in September – was horribly negligent on your part, allow me to assure you that you are are in very good company. Also, by way of a Public Service Announcement, I can now say with confidence that if a bottle of Karo syrup spills in your baking drawer, it is much easier – and more fun, in an archeological kind of way – to just let it harden before attempting to remove it. True, you could probably chisel the stuff out sooner than seven months later, but hey, why rush it?

I could try to convince you that, seven weeks later, the drawer is still this neat… but I prefer not to waste anyone’s time.