As a longtime devotee of all things Hamilton, my social media feed has been awash with news of the show’s arrival in Puerto Rico. While I feel a little envious seeing images of palm trees and beaches floating across my screens, those pictures remind me daily of our own badass Puerto Rican angel – and the incredible power of connection.

We. Love. Puerto Rico. Having visited several times, we find ourselves inexplicably drawn to it – to the lush greenery; the food, the wickedly warm Atlantic; the technicolor buildings; the imposing fortresses; the lullaby of the coquis; the rain forest and palm trees and mangroves and beaches. But above and beyond that? The people. Puerto Ricans have an almost mythic ability to make everyone feel welcome, important, and celebrated. There is a vibrant, laid-back, joy-filled energy that permeates the island, making it difficult to feel anything but wonderful.

Plus also: our favorite restaurant in the world is there.

We visited for four days. And ate at Marmalade twice. No regrets.

We had planned to return to Puerto Rico long before Maria devastated the island in September, 2017. Once it hit, we became more even more determined to go back and help… but grew disconcerted when every plan fell through. (There’s a certain laissez-faire attitude that differentiates Puerto Rico from the mainland. “You want to come help? Great! We’ll get back to you… sometime…”)

And so, last February, we flew to San Juan, no “official” plans in hand but armed with trash bags and rubber gloves, some drawstring sacks donated by my local religious community, and the promise to ourselves that we would find some way to help – even if it meant combing the beaches for rubbish or buying pasteles and beer for transplanted electrical crews.

A mere hour after settling into our hotel, I received notification about a possible lead from a hurricane assistance Facebook group. Several phone calls and texts later, I was in touch with a woman named Margarita who lived on the island’s eastern coast, providing food and supplies to her ravished community. All we had to do was show up at 8 a.m. two days later. 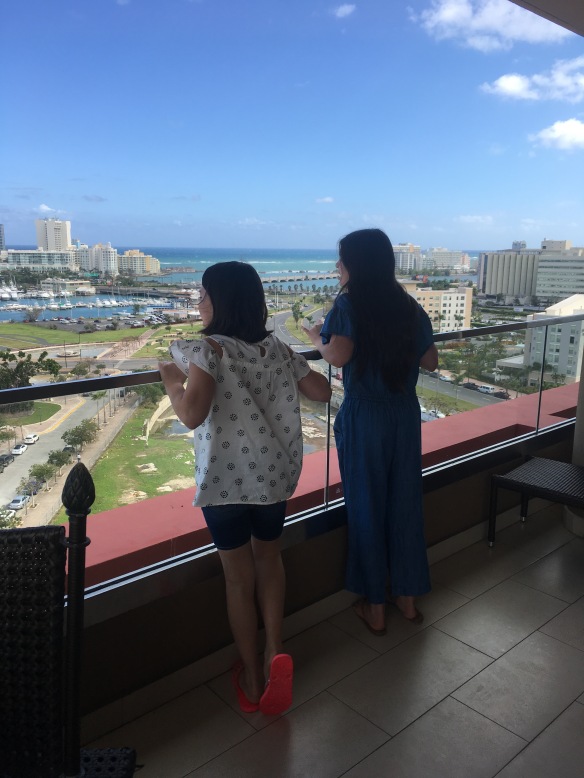 Before we went to bed that night, we took to Facebook to tell our friends we were meeting someone who would give concrete ways to provide assistance – and if anyone wanted to contribute to this effort, they were welcome to.

The response was immediate and astonishing. Within two days, we had collected over $4000 from more than sixty people, some of whom we’d never met. As each donation came in, I cried at everyone’s generosity… and became nervous AF as to how we’d put their hopes and money into action.

We didn’t have an address. Our directions consisted of instructions like, “Turn left at Walmart; turn right when you see houses…” We had no idea what we’d be doing. We didn’t even know what ‘Margarita’ looked like. Nevertheless, in true Puerto Rican fashion, we decided to trust that all would work itself out – and if not, we’d have one heckuva story to tell.

36 hours later, we scarfed down breakfast at the hotel before hopping into the rental car and heading southeast toward Humacao. 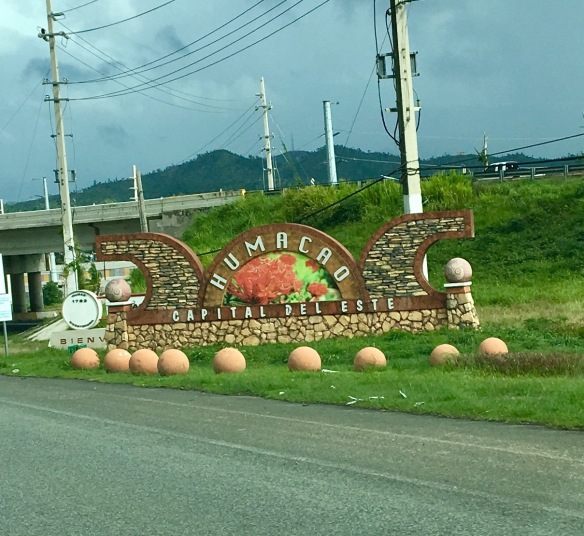 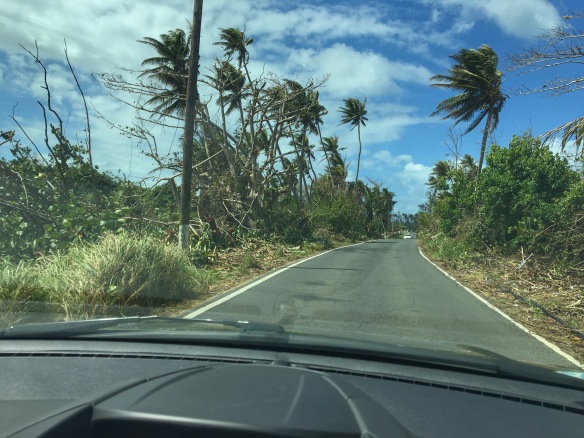 Humacao was, more or less, where Maria entered the island before making its deadly trek westward. Although much of Puerto Rico had its power back, the region of Humacao did not – more than 5.5 months post-Maria – nor did it have running water. Schools were open for just a few hours each morning, battling the oppressive heat and lack of electricity along with no toilets or water. Businesses, unable to function, were temporarily shuttered. Even if residents wanted to drive to work, their meager gas supplies were put toward running generators, not fueling cars.

It was, quite literally, a hot mess.

Less than a mile from Margarita’s house…

After a couple of wrong turns, we located the parking lot where Margarita said she’d meet us. I held out my hand to greet her, but despite just laying eyes on one another, she immediately enfolded us – all four – into gigantic hugs. “Follow me! I’ll show you what we’re gonna get to help the people!”

And so we followed, to an enormous grocery warehouse where Margarita enlisted two young men (Gabriel and Roberto, awesome humans) to load up pallets with whatever she told us to get: sugar, Chef Boyardee, tomatoes, canned vegetables, coffee, canned meat and sausages, tunafish, bread, cereal, canola oil, three kinds of beans, rice, toilet paper, Clorox, and lots of water.

The cars were packed so full, Annie had to sit on Ella’s lap as we drove to Margarita’s house – and Nick and Margarita still had to return for a second load!

Neighbors materialized the moment we arrived; they were exceedingly patient, standing in the brutally hot sun without an ounce of shade. After finalizing the set-up (Margarita had a system, obvs), she informed everyone of the “rules” – only one of each supply, per person, and everyone had to choose either Clorox or cooking oil… there wasn’t enough to have both.

That really drove things home: their situation was so extreme, residents had to choose between disinfecting their homes to ward off disease or cooking their meals. Nearly six months post-hurricane! In the United States! It was insane.

Margarita understood that the best way for us to truly help was for us to be the ones distributing – so we did, handing out the food, speaking in a combination of English and broken Spanish to people who just kept saying “thank you” over and over again.

There were two moments that broke the assembly line: once, when the downpour came, monsoon-style, and we scrambled to get underneath a ginormous tarp that Margarita and her husband, Manuel, had waiting beside the house so we could still distribute the food… and once when a woman tried to take both cooking oil AND Clorox and Margarita had to wrestle it out of her hands because NO ONE messes with Margarita.

This woman is a FORCE, y’all.

Getting ready to distribute… 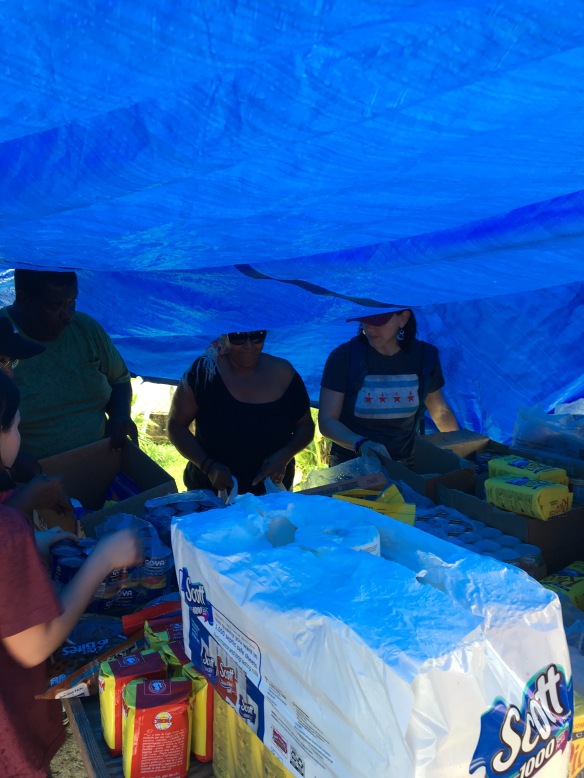 When all was said and done, more than 50 people had gotten food. After a nail-biting trip to a bank where we essentially begged them to get us cash from another bank’s account so that Margarita could obtain vouchers for gas (they didn’t teach me, “I NEED CASH NOW FOR TOTALLY LEGIT PURPOSES” in Spanish class), we ended our visit with a 45-minute chat with Margarita, discussing anything and everything, before leaving, through tears, and returning to our power-filled, air-conditioned hotel. To say it was a sobering and powerful experience doesn’t begin to do it justice… but, turns out, it was only the beginning.

Within a week, we’d used some of our friends’ donations to send Margarita mosquito nets, diapers, and school supplies. We boxed up aerosol bug spray (Amazon won’t ship aerosols to Puerto Rico) and spent 10 minutes talking with the employees at the post office about how to send the cans safely – and, more pressingly, the situation in Humacao. Connections. It was pretty fantastic.

The ridiculous kindness of our friends’ donations allowed us to continue to assist Margarita throughout the year: cash transfers, shipments of toys, additional supplies. But most important – and least anticipated at the beginning of this adventure – has been our continued relationship with Margarita.

Eleven months later, she still calls me every couple weeks to discuss how things are going. She sends me photos of her local humanitarian efforts several times a month, along with articles and memes (that I need to use Google translate to fully understand). We made sure to video chat on Easter as well as when she received our Christmas card. She has become part of our family.

Setting up and distributing Easter donations… 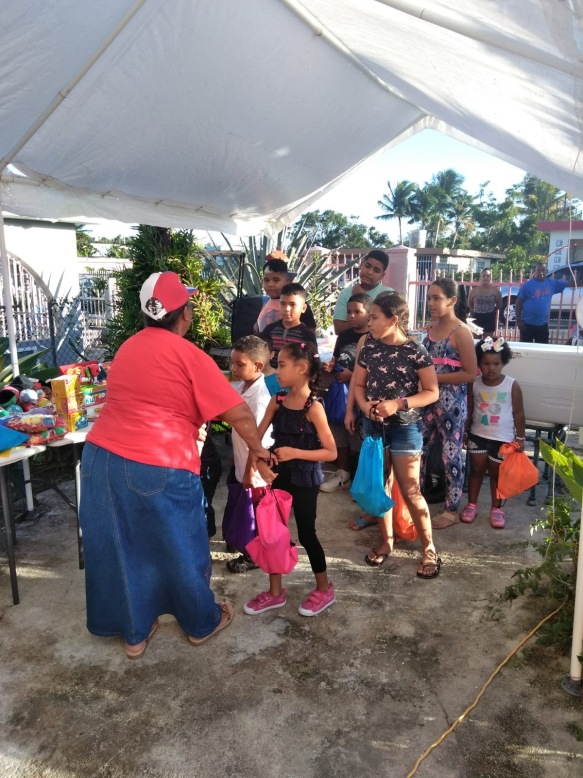 In December, using the last of the donations, we were able to ship some toys, backpacks, and water bottles from Amazon, intending them to arrive by Christmas. I was disheartened that they wouldn’t arrive till the New Year, but Margarita assured me it was perfect because she planned to parcel out Three King’s Day goodies to those in need; our contributions were right on time.

I needed Google to help with this one…

There were countless negatives to 2018, but there was also so much good. 2018 showed us how very generous and thoughtful people can be. It taught us about the magical power of connection. And it introduced us to one of our most-beloved humans on the planet.

If you visit Puerto Rico today (and, oh, please do!), it looks largely as it did before Maria – but that doesn’t mean all is well. Unemployment remains high. Schools were forced to close in the hurricane’s wake, so children are bused to farther-away, crowded buildings. The local government is corrupt and the federal government denies much-needed supplies and assistance.

But Margarita continues on. She makes sandwiches for the homeless every week. She uses donations to distribute clothes, diapers, and food to those in need. She meets with local officials. She helps ensure kids have school supplies. She’s a freakin’ badass angel and we cannot believe that we even got to meet her, much less become part of her “family.”

An article highlighting some of the work she’s doing… 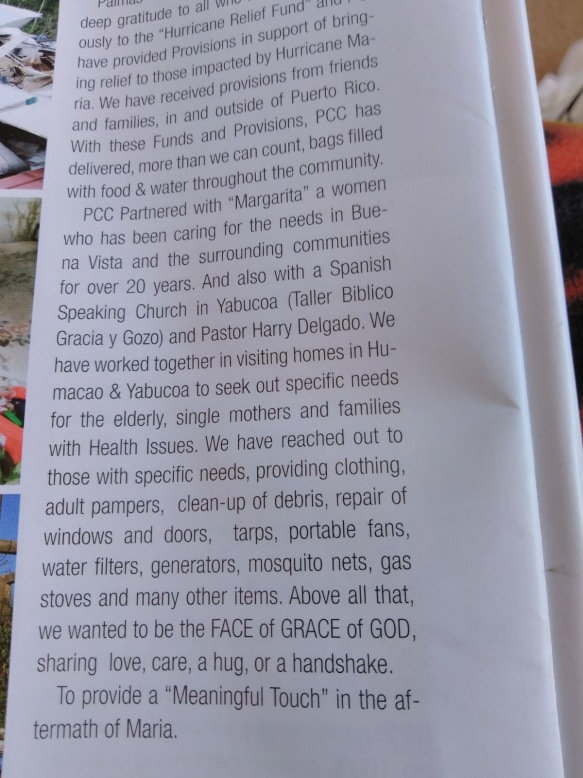 The next time we’re on the island, we’ll absolutely visit Margarita. Until then, we have What’sApp, video chats, and mail to keep us connected with our badass angel… and with the people of Puerto Rico. Here’s to hoping for even more connections in 2019.